“The Pleasant Companion” is perhaps the most famous tutor for the French flageolet due to its being used by the diarist and amateur flageolet player, Samuel Pepys, who took lessons from its author, Thomas Greeting.

It is not known when “The Pleasant Companion” was first written, although Samuel Pepys bought a hand-copied version of it in about 1668 which gives an earliest possible date for the printed version.

The printed version was published by John Playford (1623-1686) “near the Temple Church” in the City of London. Playford was perhaps the most successful music publisher of the period, who managed to survive through the wildly different musical tastes of the Commonwealth and Restoration. According to Robert Clavel’s “Catalogue of all the Books printed in England since the Dreadful Fire of London, 1666, to the end of Michaelmas Term, 1672”, its original price was 1s which made it one of the cheaper music books available. He also lists a “Directions for the Flagelet” and a “2d Book of Lessons for the Flagelet” for sale by Greeting. It is not clear whether either of these is an earlier version of the Pleasant Companion or another work.

Although it is the most famous tutor of the period today, it was not the only work published in the period. Clavel lists a two volume “Youth’s Delight on the Flagelet” and a “Directions to learn to play upon that pleasant and spritely Instrument the Flagalet, without the help of a Teacher: The Second Part, never before published” sold by Robert Paulet in Chancery Lane for 1s 6d. Indeed, whilst far fewer tutors were published for the flageolet than the viol or violin; the numbers are about equal to those for the recorder or flute and more than for instruments such as the lute and cittern. The attractive name for the work was also not usual, in addition to the “Youth’s Delight”, the musician could buy a “Delightful Companion” for the Flute or Recorder or a “Fashionable Companion” of songs.

Structure of the Work

The work consists of a short introduction followed by 70 short pieces for the unaccompanied instrument. In addition to its importance as a substantial corpus of music written specifically for the instrument from the 17th Century, the work is notable for its use of tablature throughout which is clearly aimed at allowing the amateur who cannot read music to play more quickly and easily than with traditional methods.

The use of tablature has resulted in a number of quirks: the music needed to be hand-engraved; the frequent ornamentation is written out; and the music is quite hard to study in its original form, without being transcribed back into conventional notation.

The music mostly consists of short dance and popular tunes. Most are anonymous but many are credited to individual composers, the most popular of whom was John Bannister. Only number 48, “Braules by Mr John Bannister”, is of any length, at 70 bars long (excluding repeats). Apart from the very first two or three tunes, which seem to be deliberately slightly easier, the standard seems reasonably high and comparable to other amateur music of the period.

The final 10 tunes are in a different hand from the remainder of the work; the spelling of flageolet in the header has changed from “flagilet” to “flagelett” and the note heads of the rhythm have changed from the older, square style to modern, rounded ones. It is therefore possible that they were a later addition, although why they were added is not clear.

This transcription has been prepared from the copy of the work held in the Dayton C. Miller Flute Collection. Only the first 20 tunes are available: I hope to transcribe the remainder as time permits.

In transcribing the tunes, I have added a realisation in modern notation. Whilst Greeting’s flageolet was an in instrument in G (i.e. covering all six holes produced a G), I have transcribed it as an instrument in D since most later flageolet music was written in this way.

The tablature has been transcribed as originally printed, with the following changes:

THE
Pleasant Companion:
OR NEW
LESSONS and INSTRUCTIONS
FOR THE
FLAGELET.
By THOMAS GREETING, Gent.
LONDON, Printed for J. Playford, and are to be Sold at his Shop near the Temple-Church, 1680

Instructions for Playing on the Flagelet

The Flagelet is an Instrument that may very fitly be termed A Pleasant Companion, for it may be carried in the Pocket, and so without any trouble bear one company either by Land or by Water. It hath this advantage over other Instruments, that it is always in Tune, which they are not: And for those whose Geneius leads them to Musick, I know not a more easie and pleasant Instrument: And though it at first may seem difficult to Beginners, yet with the Practice of a few hours, observing these following Directions, and a little assistance of a Skilful Master, the knowledge hereof may be readily attained unto.

Of the manner of Playing on the Flagelet

Your Flagelet being held as is directed, and your Fingers on the six Holes, your first Stop or Note is 6 Dots, the second 5, the third 4, the fourth 3, the fifth 2, the sixth 2 divided, the seventh 1, the eight a Cypher [○] which is all open. Blow gently, and take your Breath at every Note or Sound. Example of these in their order.

Directions for Playing the Eight Notes Up or Ascending

To Play the Eight Notes Down or Descending

Practice to play these Eight Notes ascending and descending, till you are perfect in them, always observing this Rule, that in Notes descending, and in Notes that Rise or Fall by Skips, you must suddenly increase or diminish your Breath, as the Notes require. The taking off a Finger raiseth, and the stopping down the contrary. Always remember to stop the Holes close, and to hit every Note distinctly with the tip of your Tongue.

Next is set down Examples of the Pinching Notes and Graces; Also a Table of the Notes Flat and Sharp, ascending on the Violin and Flagelet. 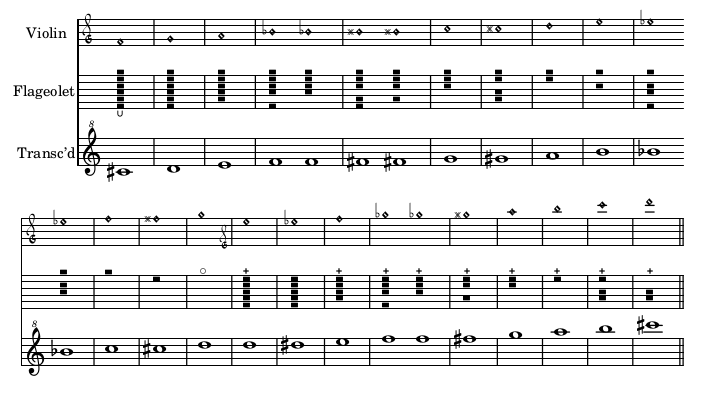 On the Pinching Notes on the Flagelet

Example of the Pinching or higher Notes

The Pinching Notes ascend eight Notes higher than the Plain Notes, and are distinguished from them by a dash drawn through the first or highest Dot, making it a Cross, as in the foregoing Example. To play it on the Flagelet you must do thus: Bend your left thumb, and let it be but half over the first Hole (on which the Pinch is alway made, by Punching your Nail hard over half the Hole) then give it a stronger Breath than the former Notes had, and you shall find the Sound of the Flagelet to be eight Notes higher. All the other Stops are the same with the former.

On the Several Graces on the Flagelet

In the former Example of Graces, the Mark or Character of a Beat and Shake is all one, but in Playing them is this difference: When the Mark is on the same Line even with the Dot, then you are to lift up that finger and shake, and lay it down again before you play nay other; this is called a Beat. But when the Mark stands alone upon any other line underneath the dot, then with the finger belonging to that Line on which it is set you must shake, taking it off again before you play any other Note; and this is called a shake. The third mark is for a slur or slide, that is, when two Notes are tyed together by a crooked dash underneath, then those two Notes must be express’d with one Breath. There is another much like this, which concludes with a Beat, and play’d thus: Hit the first Note with the tip of your TOngue, and continuing your Breath, take up the second and bring on the first beating.

The Names of the Notes

Of the Time, or Proportions of the Notes

The Mood for the Common Time is thus Marked 𝇍, and is multiplyed by two, as one Semibreve is two Minims, on Minim two Crotchets, one Crotchet two Quavers, &c.

If what is said here concerning the Common Time be not sufficient to Instruct a Beginner, I refer him to Mr. Playford’s Introduction to the Skill of Musick, where he may not only be Instructed in this, and the Triple-Time, but in all the Grounds of Musick, both Vocal and Instrumental.

The Mood for Triple-Time is thus Marked 𝇊3, and is multiplied by 3, (the Note having a prick added to it) as one Minim with a prick is three Crotchets, &c.

Lastly, this Example is to be observed directing what Key or Note and Tune pick’d for the Violin is proper for the Flagelet; in which observe, that all Lessons belonging on the Violin in A re, F faut, C solfa, and D lasol, have the same Key on the Flagelet; other Keys do vary as is here to be seen.

By the observation of the former Example of all Notes Flat and Sharp (according to the Scale of Musick, by Notes as well as Dots,) you will soon come to play any Tune prick’d by Notes. To conclude, I have endeavour’d with all Candor and Integrity to render this Book both useful and acceptable to all Lovers of Musick, who I hope will receive it with the like.