A Family of Instruments

The word “flageolet” or “flagelet” refers to an instrument which is a member of a small family of fipple or duct flutes. Whilst defining the distinguishing features of a flageolet is quite a difficult process, in general there are two features which set them apart from other fipple or duct flutes, such as the recorder, csakan or tin whistle: 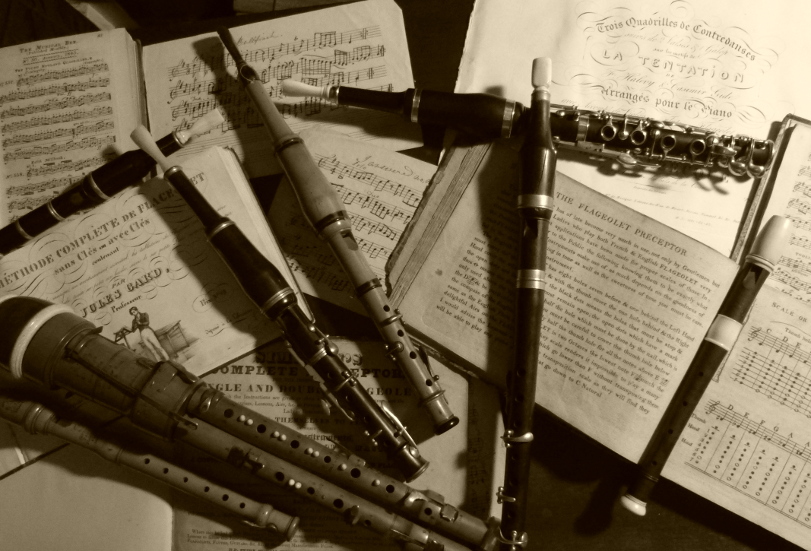 What are the different types of flageolet?

Within the flageolet family there are three main types of instrument: the French flageolet; the English flageolet; and the Double flageolet. The names “English” and “French” date from the early 19th Century and are simply used to avoid confusion; the individual pages give some more details about naming conventions.

From simple beginnings in France as recorder–like instruments, over the centuries flageolets became increasing complicated and sophisticated instruments, used for personal enjoyment; making guest appearances in operas and even being used to teach birds to sing. In an attempt to smooth rough amateur breath control a distinctive arrangement of barrels and beaks was introduced in the early 18th Century and, soon, instrument makers were combining this unique profile with the simple 6–holed fingering system of recorders and transverse flutes to make a new instrument—the English flageolet. Both this and the traditional (“French”) flageolet continued to be popular in the 19th century, joined with the multiple–flageolets, invented at the turn–of–the–Century. However, despite a late revival as the solo instrument in Quadrille bands, the production of cheap tin or penny whistles took away the amateur market, resulting in a slow decline of the instruments into obscurity.

A note on terminology

In English, the spelling “flageolet” is now universal (as it has always been in French). Historically, “flagelet” was preferred in English until about 1810: it is notable how the adverts of William Bainbridge begin to switch to the more consciously French spelling in about this period. Both spellings persisted throughout the 19th Century, with “flagelet” slowly becoming less popular. A few other spellings, such as “flageolette”, “flagilett” or “flagelett” are occasionally seen but these were never common.

Although the terms “French” and “English” are now ubiquitous, they only began to be used in the early years of the 19th Century (the earliest usage I can find is from 1809) and only became common in the 20th. Instead, for most of the instrument’s history, one simply had to rely on context to work out which type of instrument was being referred to; something which can make historic research difficult.

Occasionally, other distinguishing expressions were used. The most common were to refer to the French flageolet as a “Quadrille Flageolet” (on account of its popularity in Quadrille Dance Bands) and to the English instrument as a “Improved” or “Patent” Flageolet even when the instrument could not properly be described as an Improved or Patent one.

Since a number of important organography works were written in German, it may be helpful to note that “Flageolett” is the usual German spelling.

Where does the word “Flageolet” come from?

The word “flageolet” is usually accepted to be a diminutive of the Old French for a flute: “flajol”. A translation of “flageolet” might therefore be “little flute”. As a consequence, historically, the word was also used with little consistency to refer to any type of small flute, particularly those encountered in non-Western musical traditions, and today it is sometimes used as a more sophisticated name for the tin whistle. Both of these can cause confusion from time to time.

In terms of sound, the most striking feature of flageolets is that they tend to be very small and very highly pitched. The largest size commonly encountered is the English flageolet with lowest note an octave-and-a-note above the piano’s middle C (i.e. similar to a piccolo or descant recorder). French flageolet are usually pitched a fifth higher with their lowest note being the A an octave-and-a-half above middle C. The small size probably helped the instruments’ popularity amongst amateurs: you could carry it around in a pocket. It also resulted in some unusual uses for the instrument, such as teaching tunes to song birds and as a descant instrument in dance bands.

Whilst we cannot be sure if flageolet-makers of the past has a consistent sound for which they were aiming, my view is that a flageolet should have quite a bright, clear tone, like a bird, which can cut through surrounding noise and carry for some distance.

There are 5 comments for this page.