Warning: I am not convinced that this article is very good or makes very much sense. However, the topic is quite important and I hope to re-write when time permits. I thought it was not worth delaying the re-launch of the site for this one article. Apologies.

The French flageolet is often considered (either explicitly or implicitly) to be, along with the recorder, one of the two instruments of the family of Western art music fipple flutes. This article contains some preliminary thoughts as to whether it would be more useful to look beyond the recorder and other six-hole flutes and towards some of the less-commonly-encountered instruments of Europe when making comparisons of the French flageolet’s history, development and technique.

One of the features which makes the French flageolet an interesting instrument to play is its unique layout of tone-holes. The layout has two distinguishing characteristics:

These features particular stand-out when compared to the standard six-hole arrangement that is ubiquitous in modern Western wood-wind instruments. This arrangement has six-holes on the front, arranged so that a major scale is played when they are released one-by-one and is most familiar as the layout of tone-holes on the English flageolet or tin whistle. With some slightly modifications (e.g. addition of a thumb-hole at the top, and extra keys at the bottom), it is encountered on many of the Western wind-instruments played today, from the recorder to the saxophone.

The result of the French flageolet’s system is that, for the beginner, learning to playing the instrument can pose a challenge. Cross-fingering is required to play even a simple scale, and familiarity with other instruments (e.g. the flute, oboe or clarinet) is more of a hindrance than a benefit. However, one mastered, the fingering proves to be of great benefit. Unlike the recorder or tin whistle, for which playing in keys outside a small range is extremely difficult, the French flageolet can quite easily play in even fairly exotic keys. The strength of the layout is as a compromise: by making the simple keys harder, the harder keys become easier.

Despite this very unusual feature, the French flageolet is also thought of, historically and musically, in the same category as the English flageolet, the Csakan and, particularly, the recorder. This can be justified, to a certain extent, by the instrument’s history but perhaps less so by its construction. In terms of playing technique, it is rather far away from these six-hole flutes.

Other Instruments Worth Considering

The instruments which seem most relevant include the flabiol; the tabor pipe; the txistu; the galoubet. These are all variations on the tabor pipe which exists in a wide variety of countries within Europe. A tabor pipe is usually a fairly small fipple flute (although bass versions do exist) which is played with one hand. This leaves the other hand free to play a tabor (a drum) or some other instrument as an accompaniment. Generally, tabor pipes have three holes, with the upper-most one being on the back of the instrument (to be played with the thumb). Most are arranged so that the three holes produce the first three notes of a major scale when raised in turn. This is not dissimilar to the top three notes of the French flageolet, where the top three holes are arranged in the same way, albeit to produced a G, B, and D (rather than G, B, and C). The Basque version, txistu uses the bell of the instrument as an extra tone-hole, to be worked by the little finger of the left-hand, in a similar version to the French flageolet. The galoubet, the Provence version, is fairly similar to the English tabor pipe. The most interesting of the tabor pipes, though, is probably the flabiol, the Catalan version. The flabiol is one of the constituent instruments of the Cobla, the 11-player band used in much Catalan music and is played with a very small drum. What makes the flabiol different to other tabor pipes is that although it is usually played with just one-hand, it can be played double-handed: the instrument has three extra holes at the bottom to be used by the right hand to play extra low notes. Like the French flageolet, both thumbs are used, when playing with both hands, and, again in a similar way to the French flageolet, the arrangement of holes does not allow a major or minor scale to be played without cross-fingering.

Similarities might also be seen in the fujara, the overtone flute of Slovakia. Fujara are usually very large flutes (c.5' or 1.5m) but only have three finger-holes (on the front). In a manner similar to the tabor pipes but unlike the French flageolet, extensive use is made of the higher overtones, to allow a greater range of notes to be played.

The following diagram gives a very simplistic comparison of the tone-hole arrangements of the some of the flutes mentioned above. 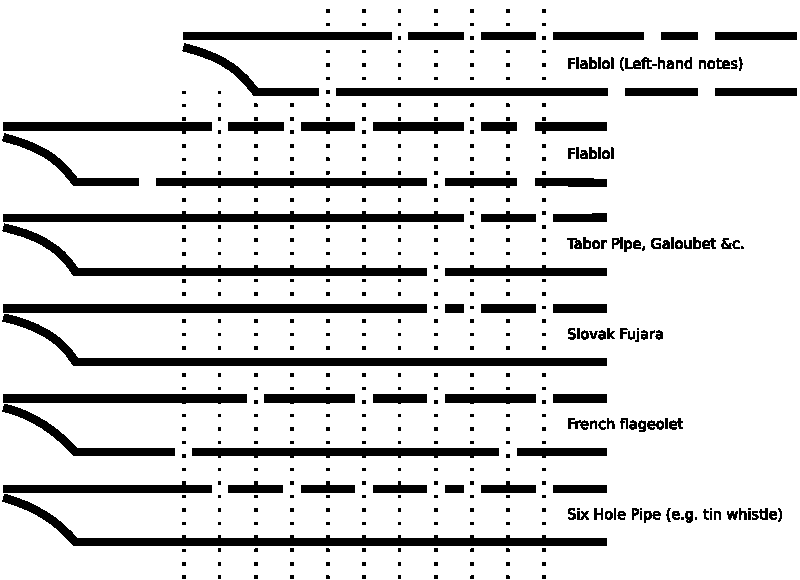